I'd like to report that Team "UII" Can Spread Hope! made a great showing at the 6th Annual SSF Philadelphia Walkabout!  Eight of the ten original walkers (we lost one to an inflexible work schedule and one to a foot injury) braved the near-100 degree heat index to support Sjogies everywhere:D  Here's my favorite picture of our team: 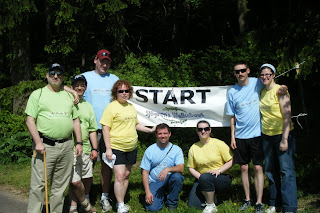 Team "UII" Can Spread Hope! 2010
My dad and brother, in-laws, and best friends came out, and even wore my silly t-shirts.

Shirt Back
Though, my shirts were not without a purpose;)  Besides the obvious, I wanted bright team shirts that had a clear message - one people would ask about (and I'm not above directing people to Ask Me About UII, hahaha).  And it worked.  I spoke to at least 3 or 4 people about it, not counting anyone my friends and family spoke to.  One of them was a committee member for the Walkabout...and asked me to be on the committee next year *victorious grin*.  We tried to move as a unit, which kept the Foundation photographers buzzing around.  They sent me four of the pictures they took, which I posted on Facebook along with my own pictures.  Here's a link where you can see them all (you don't have to be on Facebook to follow this link): Jenny's SSF Walkabout Pictures.  I was able to hand out a couple of business cards.  Yes, a successful day indeed:)

But of course, promoting UII is not my only goal, and I also call the day a success because it apparently had a record turnout and fundraising total.  While I couldn't hold out for the closing ceremonies (I tried, I really did, but the walk step-off was quite late, the sun was quite harsh, and this little Sjogie had quite enough for her dried out body for one day), and therefore don't know the exact numbers, I know it surpassed the past 5 years and probably all expectations.  My own thank you to not only those who donated, but also who tried to help me spread the word about my team and the Walkabout; you're certainly part of this success.

I got to meet my new Facebook friend Katharine, who told me about the Walkabout in the first place.  It was really good to talk to her (and her shirt was awesone - "Sjogren's Sucks"), and I'm excited to hang out again with her and other people we've met who are in the area (feel free to join us).

My dad, who could not actually take part in the walk itself, spent the time chatting up the head of the Foundation, discussing UII and other topics (it's pretty obvious where I get it from, the promo apple doesn't fall far from the networking tree).  Hopefully that'll turn into some attention for our group:)  Remember, UII isn't just about Sjogren's, or even autoimmune diseases.  It's about all Invisible Illnesses - autoimmune or neurological conditions, cancers, arthritic illnesses, blood disorders, mental/emotional conditions, chronic or accute problems...the list just goes on and on.  What we all have in common is that someone looking at us can't see the crosses we bear.  We don't "look sick", and therefore find ourselves discounted by many people.  Furthermore, many II's are difficult to diagnose (as we know) and are often poorly understood even by medical science.  We need each other - which is why I call this support and awareness effort "UII".  So we remembered we're not alone.  UII brings us together to support each other and share stories; to see other people make it and know we can too; to discuss specific symptoms and benefit from combined knowledge as we help each other sort through the haze.  It's amazing what difference it makes when you know you're one of millions.  (By the way, I also won a SSF windbreaker for knowing that approximately 4 million Americans are believed to have Sjogren's... think about that statistic.)

The first thing I noticed when I got to the walk was how many cars were already there.  I arrived probably near the middle of the crowd, and we were already parking on the grass past the whole parking lot that had already filled up.  When I registered and started to look around the exhibits, tables, and tents, I was struck.  I realized I was surrounded by more Sjogie's than I've probably ever met before!  I actually got excited, thinking about how many people there were like me!  I wanted to talk to everyone, to find out what we had all been through or what I should be aware of for my future or how people dealt with things I'm dealing with... whew!  I need to sit down!  And on the heels of that thought, this one - I wasn't sure exactly who else there was a Sjogie.  So many of us had brought non-Sjogie supporters.  I mean, in my own group I was outnumbered 7 to 1!  There may have been like five of us for all I know:)  Afterall, just because I have invisible illnesses doesn't mean I have a special power to see them in others:D

And finally, to share how the day affected me physically.  I had tried to prepare for the past week or so by trying to keep hydrated and avoiding coffee (for some reason, only the caffeine in coffee bothers me - chocolate, soda, and tea don't 'cause me any problems but coffee can set me up for a flare if another trigger comes along).  I remembered a water bottle and sunscreen, and of course my sunglasses.  I also took three kinds of eye drops, and ace bandage, and a snack bar (my blood sugar had gotten messed up at the end of the week).  I also took my Provigil to stay awake.  I forgot my ibuprofen (stupid), but my best friend remembered hers (that's what friends are for).  My plan worked, and I was able to do the walk.  I had a bit of back pain from standing so much during the activities before the walk itself, but my friends made me sit down for a bit and took my backpack, and then everything was ok.  I handled the walk well, and tried to hang out under the tents to minimize the risks of sun exposure.  After the walk (and a shower), my friends and I got lunch, then spent the rest of the day sitting around like third base (actually, there were four of us so I guess we were a whole diamond).  We definitely needed the rest.  I've been stiff since yesterday afternoon, which isn't really relieved by much.  I'll let my joints rest until tomorrow, then I'll start trying to stretch them out and work on my range of motion.  By then they should be healed enough to handle the motion.  I'm trying to keep hydrating and avoiding coffee for at least a day or two (if I can hold out - I've been craving Starbucks for 2 weeks).  At that point, I think I'll be ok, though right now my knees still have this feeling like being sunburned but from the inside.  Ah, fibroid and connective tissue can be such fun.

My concluding evaluation of the entire project?  A successful venture, a good day, and a LOT of things to do for next year.  Ah, I like this feeling:)
at 11:28 PM 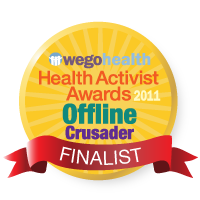